Resources
Crafting Guide
Recipes for item creation
Material Depth Guide
Where to find the best ores
Surviving Your First Night
A newbie's guide to Minecraft
Surviving Your First Grief
What to do, who to blame
Getting Over It: How to Accept Loss
The fine art of starting a witchhunt
Seriously, It's Just Blocks
Stop acting like someone murdered and raped your entire family, in that order
Links
Minecraft.net
Gee I wonder where this leads
Notch's Tumblr
The author's personal blog
Notch's Twitter
Follow his every word with bated breath!
MCUpdate
Minecraft's update page
Where's Notch?
Up-to-the-minute Google Maps
ToiletCam
What's Notch eaten lately? Find out!

They came in waves of ten and twenty at a time. They came with axe and sword, with bow and torch. We saw the error messages in the console, saw the bright lights on the horizon, but didn't understand the warnings until it was too late. Those living in private residences outside Derptown Prime were the first to fall, their cries of anguish unheard in their private channels. It was only after the farms were aflame and the southern wall had been breached that we realized what was transpiring.

The dwarves. They had been plotting in their mountain homes in secret, hiding beneath the watchful eye of our scripts, or perhaps in league with our antigriefs. We were lax in our attention, thinking ourselves invulernable under the all-seeing eye of our Java fortresses, as sturdy as the rock walls surrounding our precious ores and cakes. It was our hubris that destroyed us, the creeper from within.

I write this huddled in a makeshift shelter in the bowels of Stripmine Gamma with a handful of other survivors, not more than a half-dozen cooked porkchops and a set of leather armor between us. They've been flooding the entrances with lava and water, sending kill-teams of trained creepers and skeletal archers into every nook and cranny. I can hear them; the screams are getting closer. These terrible sounds will haunt me forevermore, the cruel laughter of the dwarves and the chittering of their spider mounts. With each explosion, another hasty barricade is destroyed, and the horrors draw closer to our position.

I almost want it to be over with. It's not the explosions, or even death that frightens me so deeply. It's the anticipation. It's that horrible, horrible hiss before the final kaboom.

If anyone ever finds this journal, let it be a warning to overzealous modding. Beware the lure of the plugin, the siren call of the Bukkit. Work with your players, don't force them to exchange the illusion of security for freedom. For one day the dwarves will come calling on your dicktowers and your pixel art, and you had better be prepared when they do. Notch help us all. 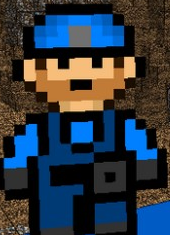 Minecraft - View All by Author
[X] Comments
[#] Stealth Update!
02:03am EST - 3/31/2011
Hey guys, it looks like Notch released a stealth patch in preparation for the Friday Update! People have been reporting strange creatures hiding at the edges of their draw distance that scurry away when approached. No one's been able to get a (non-doctored) screenshot that gives any clear identity, but I did manage to take this: 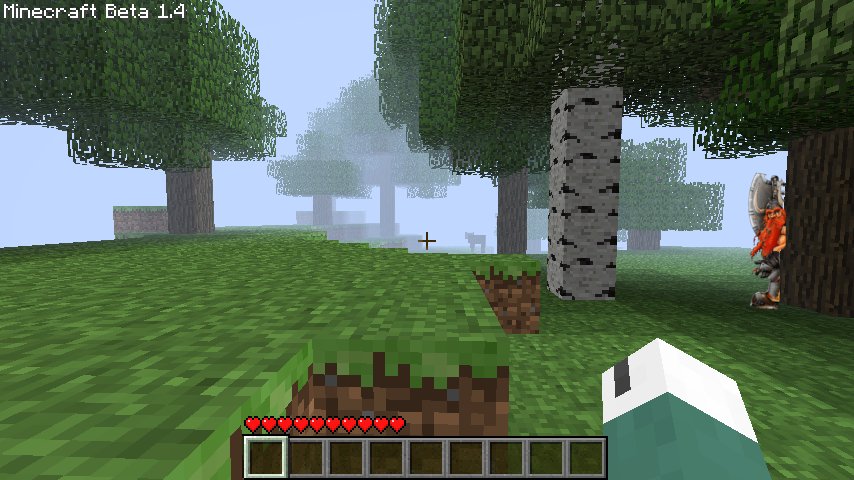 Anyone have any ideas? Maybe a new pigmen-like mob?

Minecraft - View All by Author
[X] Comments
[#] Griefers are back
11:20pm EST - 3/30/2011
I'm sorry to say this, guys, but it looks like the griefers are back. Despite the whitelist and having all of the antigrief mods set to Fascist, I still haven't been able to stop people from vandalizing each other's property. Looking at the logs, I'm having trouble seeing when it's happening; as far as I've been able to tell, a lot of the mysterious structures and wanton looting occurs when no one else is actually on the server. I think I've got a couple culprits in mind, but I won't know for sure who's been burrowing these deep holes in the sides of mountains and stockpiling everyone's diamonds.

On a wholly unrelated note, the Dwarf Fortress automatic map conversion utility is working great! I've been testing it on a separate server instance, and letting the game run for a while before jumping in and exploring the structures made by the dwarves. It's pretty cool, and I recommend checking the Bukkit forums for more info.

Minecraft - View All by Author
[X] Comments
[#] New Map, New Plugins
01:40am EST - 3/29/2011
Hey gang! It's been a while, but the latest map has been going swell! We managed to finally chase off a lot of the griefers with about a dozen new mods that restrict and monitor access on the molecular level, preventing even the most minute change from occurring without an admin knowing about it! It's a good thing Notch implemented all that stat tracking; now I can see if someone's been using a flight hack by comparing their distance travelled to how many footsteps they've made! (FYI the mod isn't 100% accurate, careful when jumping off high surfaces because you might get permabanned!)

Still, it's worth the totalitarian regime run by uncaring, unbending machinations of cold, logical programs to keep someone from blowing up my dirt house for the 8th time! Fingers crossed I don't run into any creepers!